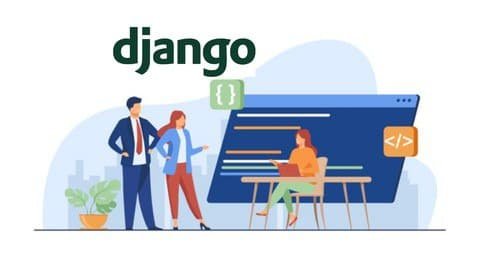 Django is one of the most popular and mature Python web development frameworks. Django lets you build better web apps quicker, and with less code. Django is an extremely popular and fully featured server-side web framework, written in Python. It allows you to quickly create web apps. It is fast, well-secured, and scalable.

As a developer, choosing the right framework for web development is crucial for a top notch website. Using the powerful, simple, and flexible Python-based Django framework, one can develop robust web solutions with just a few lines of code. Django has emerged as a prominent framework that is loaded with features. It is a server-side web framework that is written in Python and helps the developers in creating web apps quickly and efficiently. Amongst the modern day programming languages, Python and Django are preferred the most by the developers due to their robust programming structure.

Django is the most versatile and most mature Python front-end / web development framework around. It makes it easy to build better web apps more quickly and with less code. Django provides a high-level python web framework for building dynamic web pages with content management needs.

Why use Python based framework

Python is readable, efficient and easy to learn as its syntax follows the pseudo code and Django is a powerful framework that makes web app development easier. It provides the infrastructure required for database-driven websites that need content administration, file uploads, user authentication and more.

Most of the Python users use Django as their primary web framework. Django also remains the most preferred Python framework with top organizations such as Google, Facebook, Instagram, Netflix, Spotify, Dropbox and many others using it. The framework addresses almost all the industry requirements as it is versatile and powerful, making it suitable for any project.

Python and Django enable developers to create customized web applications without writing additional code, and the maintenance is easy too. Individuals and organizations alike can avail numerous benefits.

Django forms the backbone of some major web sites and is known for its relative ease of use and the speed at which you can develop and deploy Python web applications and containers. Moreover, Django is open-source and is maintained by the Django Software Foundation. Django provides an easier path for developers to produce database-driven websites. It shortens web development through reusability and through it’s modular nature. It produces dynamic websites using less code with pluggable components and is maintained on GitHub. Source code and Django documentation are widely distributed, and the project is always evolving.

This Django course will teach you the core concepts of Django, starting from scratch and moving on to build powerful web applications using Django. You will learn how to make your web apps a success by maintaining code, increasing reusability, fixing bugs, and using effective template and interface systems. In this Django course, you will learn how to build your first web application with Django.

The Django training will help you apply your existing Python skills to build robust and performant web applications with the Django framework. This Django course covers various aspects of Django including Django REST framework, Django AJAX, Django jQuery, and other Django models. The delegates will be able to apply Python concepts, work with databases, create views, templates, and REST APIs in Django.

Since Django is widely used in building database-heavy websites or other complex projects, Django developers are in high demand as organizations are deploying more and more sophisticated and dynamic web applications across their products and services ecosystems.

Which Udemy Courses You want? Mail to techygroots@gmail.com! It Will Be Post soon